On Posted on February 1, 2017 by Tyler Bayarsky to Athletics News

Student-Athlete of the Month- January 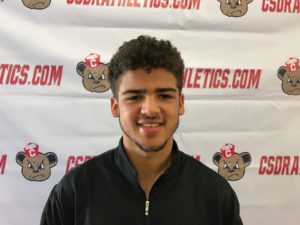 Paul Hernandez-McIntosh is new to our basketball organization this year. From the beginning of the season up to now, he has improved a great deal. His skills are budding and his sportsmanship has always been awesome. His attitude is fantastic; he thirsts for improvement at all times. He never misses practices. During games, he always gives 150% on the court from start to end. He will get up and continue playing even if he’s bleeding – at the recent Clerc Classic Tournament, he got a bad cut on his chin that nearly required stitches, but he wanted to continue playing until the game was over. He was recognized as an All-Tournament player at Clerc Classic. He also works hard on maintaining his academics.

Paul is a very coachable player. He is a hard worker and I love his attitude. I would love to see everyone else on the team have the same attitude as he has. He knows his limits but he never lets them stop him from doing his best. When I was at the Clerc Classic, every single other coach wanted Paul to be on their team. He is tough and works so hard- the other coaches took notice and liked his style so much. I am proud to have Paul as a member of the Cubs Varsity Basketball team.